Welcome to my blog

“After silence, that which comes nearest to expressing the inexpressible is music.”

Born in Ibaguè-Colombia has played with recognized orchestras in the world.

In 2010 he won the first prize in the National Trombone Festival "Cien años - Cien Trombones" Bogotá. Hugo was the winner of the "Young Soloists" competition at the Conservatory Symphony Orchestra in 2011. As a member of the National Trombone Quartet, he won the first prize with the National Quartet of Trombones in 2013. He has participated in masterclasses with Jesper Sorensen (Berlin Philharmonic), Denson Paul Pollard (Metropolitan Orchestra), Mark Hampson (Mahler Chamber Orchestra) Jacques Mauger (France), Ximo Vicedo (Spain), Vincent Lepape (France), Luis Eduardo Diaz(Colombia) Tom Riccobono (EU), Miguel Sanchez (Venezuela), Nestor Slavov (Bulgaria), Saul Rodriguez Gonzalez (Colombia), Andreas Klein (UDK Berlin). Since 2011, Hugo has served as principal trombone in the Youth Philharmonic of Colombia since 2011, giving concerts around the world in venues such as: Brazil - tour (2012-2013), New World Center (EU), Catalunya - Spain. Hugo has been invited to play with the Bogota Philharmonic Orchestra and the National Symphony of Colombia since 2011.


He has developed as a soloist playing with various groups such as the Symphony Orchestra of the Conservatory of Tolima, National University Orchestra, Conservatory of Tolima-wind band, Band National University of Colombia, Conservatory Orchestra Ibagué, and the International Music Festival Tocancipa 2014 "Toquemus." He taught workshops and master classes at the International Music Festival in Cartagena 2012 and Bucaramanga 2011. In the past year he attended the Pacific Music Festival in Sapporo-Japan and performed under maestro Valery Gergiev, among musicians of the Berlin and the Vienna Philharmonic Orchestras. Hugo has been selected by the YOA (Orchestra of the Americas) for a tour in Canada. He was invited by the Mahler Chamber Orchestra to play with musicians from different renowned orchestras and musicians from Lucern Festival, playing Mahler's 2nd Symphony in Germany, under the direction of Daniel Harding. He graduated from Northwestern University where he studied with Michael Mulcahy and has played with the Chicago Symphony Orchestra in a concert performed in Carnegie Hall. Hugo is actually working as Brass Instructor in 'El Sistema' at Ravinia and playing with local orchestras in Illinois and Michigan.

Welcome to my blog

Hugo Saavedra - Trombone   “After silence, that which comes nearest to expressing the inexpressible is music.”         ―   Aldous... 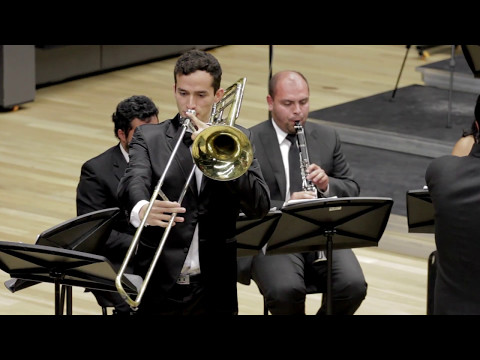